Hagia Sophia (Sancta Sophia or Sancta Sapientia in Latin, Ayasofya or Aya Sofya in Turkish) is one of the greatest landmarks of the world and the most important structure of the Byzantine architecture located in Istanbul, Turkey. The other common names used are Church of the Holy Wisdom, Church of the Divine Wisdom, Santa Sophia (St Sophia). It was used as a church by Byzantine and as a mosque by Ottoman. Now it is one of the most important museums of Istanbul (Constantinople then) and Turkey. Famous for its massive dome and mosaics (Deesis mosaic in particular), located in Sultanahmet (where Blue Mosque is), it is listed as a World Heritage Site by UNESCO. It is one of the best surviving and monumental case of Byzantine architecture.

Byzantine Emperor Justinian (traditionally known as Justinian the Great and also Saint Justinian the Great in the Eastern Orthodox Church) built the church we know today as Hagia Sophia in 537. Justinian's church was not the first on the site. The original one built in 360 by the Emperor Constantius II but burned in 404 and was rebuilt by the Emperor Theodosius II in 415. A little more than 100 years after the incident this second church endured the same destiny as the first one. Nika revolt took place over the course of a week in Constantinople (Istanbul) in 532.  Being most violent riot in the history of Constantinople, Nika riots left nearly half the city burned or destroyed and caused tens of thousands of people to get killed. This second church was one of the victims of the riot.

The destruction of Aya Sofya allowed Justinian to build a church like none other ever seen before. The scale of the building exceeded any domed building attempted before and tested the abilities of the Emperor's architects (Isidore of Miletus, Anthemius of Tralles) and emptied the state treasury. Hagia Sophia was - and is - justly celebrated for the luxuriousness and opulence of it's decoration which included rare and costly marbles, acres of gold mosaic and rich ritualistic furnishings.

After the fall of Constantinople in 1453, the genius of Ayasofya’s architects continued to dominate the conquering Ottomans who made use of the designs for their mosques. Mehmed the Conqueror converted Ayasofya into a mosque within days of the conquest preserving the Byzantine architectural legacy in a new form and era.

The building remained a mosque until the founder of the Republic of Turkey, President Mustafa Kemal Atatürk, turned it into a secular museum in 1934. At that time many of the medieval mosaics, which had been covered for hundreds of years, were restored. Today, by law, the structure cannot be used as a place of worship.

Hagia Sophia is considered one of the greatest surviving structures of Byzantine architecture. It still dominates Istanbul's skyline as it has for 1,500 years and is one of the top symbols of Istanbul and Turkey. 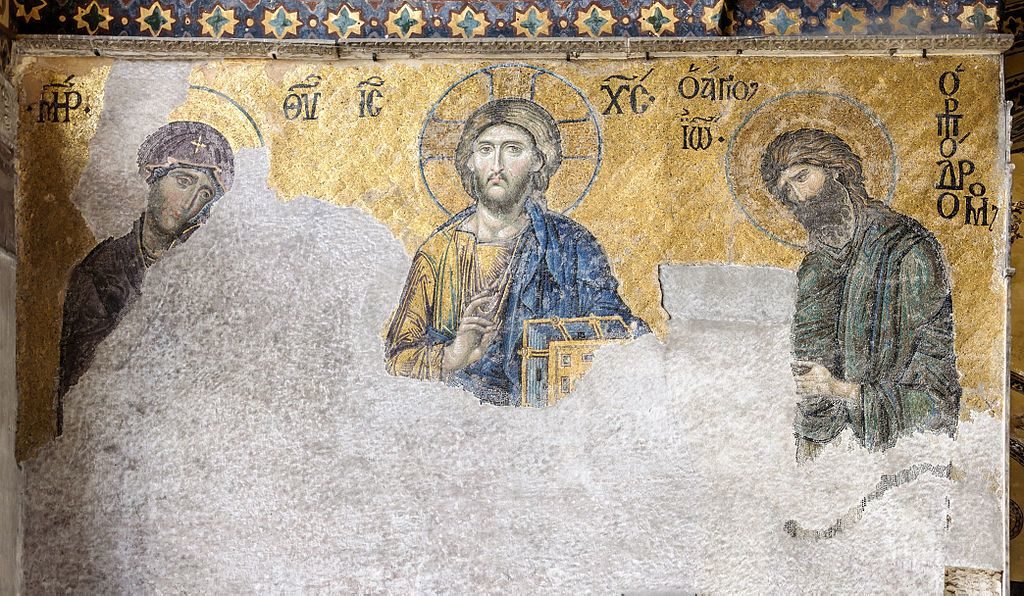 Deesis mosaic is the most prominent Hagia Sophia mosaic. Deesis mosaic is iconic representation of Jesus Christ, enthroned, carrying a book, his mother Virgin Mary on his right side and St. John the Baptist on his left side.

Dr. Elizabeth Macaulay-Lewis and Dr. Steven Zucker focus on Ayasofya before and after the conquest of Constantinople by the Ottomans in 1453 in two videos below respectively.

Ayasofya Before the Conquest of Constantinople:

Ayasofya After the Conquest of Constantinople:

You can follow the link below to buy e-ticket for Hagia Sophia Museum. You can also buy a museum pass to get more value for your money through the link as well. Buying Hagia Sophia tickets in advance will save you a lot of time since you will have chance to skip the line of the most popular tourist attraction of Istanbul.

Buy tickets for Hagia Sophia via this link -> Online Ticket

Ayasofya or Hagia Sophia is the go to place if you really want to taste the historic atmosphere of Istanbul.