The wide variety Turkish cuisine has makes it one of the best Mediterranean food in the world.

The richness of the Turkish kitchen/cuisine depends on several factors such as:

Soup is an indispensable part of Turkish cuisine in the winter. Lentil soup, yogurt soup and ezogelin soup are among the most preferred soups. Soups are served as the first course at lunch and dinners.

When the word kebab comes to mind, most people tend to think of a skewer with small pieces of meat together with vegetables such as onions, tomatoes, and bell peppers (red pepper, green pepper) grilled, generally over charcoal. But in Turkish kitchen, this is just one variation of kebab and actually this type of kebab is named as Shish Kebab (Şis Kebap) or Chop Shish (Çöp Şiş).

In Turkish kitchen, kebab encompasses a great variety of meat-based meals not only grilled or skewered meats, but also stews and casseroles.

Doner is cooked on a vertical rotisserie. It could be made from lamb, beef or mixture of them. Chicken doners are also preferred due to their being budget-friendly.

Lahmacun is made of a round (sometimes elliptical) and very thin piece of dough topped with minced meat (beef, lamb or both), vegetables and herbs. Lahmacun is commonly served with parsley, sliced lemons, and onions with sumac. 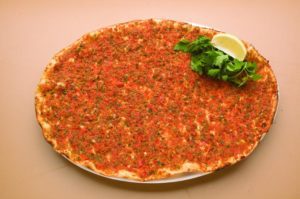 Dolma is a vegetable (bell peppers, tomatoes, eggplants, zucchinis ) stuffed with filling including rice, minced meat, grains (bulgur), herbs (mint, dill), parsley, spices (red pepper, black pepper). onion. Some of the ingredients might be left out according to one's taste and resources.

Sarma is one of the most liked dishes in Turkish kitchen. It could be made from vine leaves, cabbage or chard but the most popular one is the one with the vine leaves. The vegetable leaves are wrapped around the filling which is similar to the filling of dolma.

Turkish kitchen is known with its wide variety of desserts. The most known Turkish desserts are baklava, delight (Turkish delight) and kunefe.