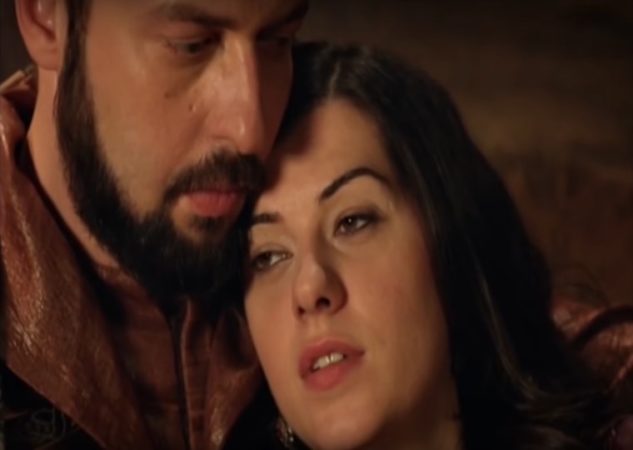 Nigar Kalfa is one of the servants working in the harem. She was sold as a slave to the Ottoman Empire. Until that time she was living in one of the villages nearby the Danube River.
Nigar Kalfa is very intelligent and very good at keeping things moving. She helps Hürrem Sultan a lot in every way. She ranks after Sumbul Aga and Daye Hatun in the harem. Nigar Kalfa easily becomes Hurrem Sultan's best friend and confidante. She really and deeply loves Hurrem and cares about her. Also she is a very big factor in Hurrem's progress overall. Nigar Hatun also takes care of the concubines in the harem meticulously. She tries her best not to leak any private matters out of the harem.

Nigar is charged with the duty of taking care of Hatice Sultan during her pregnancy. All this aside, Nigar Kalfa has had feelings for Ibrahim Pasha for the longest time. Her moving into their palace kindles her feelings more. After Hatice Sultan gives birth to his baby boy, the baby dies soon in the arms of his mother due to asphyxia stemming from co-sleeping. Hatice Sultan, with full of agony, sets off to Edirne to mourn the death of his child. By this time, Nigar continues to stay in the palace of Ibrahim Pasha. One night, she enters the room of Ibrahim Pasha with the excuse of checking on him. Ibrahim Pasha is charmed with the beauty of Nigar Kalfa. That night they have sexual intercourse. Ibrahim Pasha regrets that night and tells Nigar Kalfa that nothing of this nature will be ever again.

While all of these things are happening, Mahidevran Sultan makes plans to send Nigar away from the palace, because Mahidevran thinks that Nigar plays a major role in the rising of Hurrem in the palace. She plots with Hatice Sultan and they decide to make her marry to Matrakci Nasuh Efendi and they succeed in doing so. Before the night of their marriage, Ibrahim Pasha acknowledges his love towards Nigar Kalfa. Ibrahim Pasha wants Nasuh Efendi to divorce her. Nasuh Efendi who is owed to Ibrahim Pasha for a previous matter accepts this and in the first of night of his marriage with Nigar, he divorces her. But nobody learns about their divorce and Nigar Kalfa and Ibrahim Pasha continues their affair. Matrakci Nasuh Efendi cannot withstand the hearsay of his wife's cheating. He announces his divorce from Nigar due to her being infertile which is a lie. Then, Nigar Kalfa starts to live in a house that Ibrahim Pasha buys. Their love affair continues in this place as well. Daye Hatun witnesses their affair.
After Daye Hatun accidentally kills the midwife in the palace, Valide Sultan promotes Nigar to Daye Hatun's position. But this doesn't last long. Later on, Valide Sultan learns that Nigar is having an affair with her son-in-law. Due to this shock, she becomes paralyzed and cannot talk about this affair to anyone.

Nigar Kalfa is pregnant with the child of Ibrahim Pasha. While Nigar is informing Ibrahim about her pregnancy, Gulsah hears them and tells everything to Hurrem Sultan. Hurrem writes a letter to Hatice Sultan and tells her all about the affair. Hatice Sultan confronts Nigar with Ibrahim. Ibrahim confesses everything, and Nigar Kalfa is imprisoned in a dungeon until she gives birth to a baby girl (Kader).

Hatice Sultan also explains all of these things to her brother Sultan Suleiman. Suleiman's confidence towards Ibrahim Pasha takes a huge blow. After this, Ibrahim Pasha goes on a campaign in a hurry due to his embarrassment towards Suleiman.

Nigar Kalfa gives birth to her daughter (Kader), and she is told that the baby is born dead. In fact Hatice Sultan hides the baby girl. After the birth, Hatice Sultan orders Nigar's execution, but Rustem Pasha saves Nigar. After Suleiman returns from the campaign, Nigar Kalfa is given in marriage to Rustem Pasha.

Nigar Kalfa learns from Matrakci Nasuh Efendi that her daughter is still alive. She finds out the child whom she knows as Kader, later to be named Esmanur by Ibrahim Pasha, is her child. She tries to escape with Esmanur, but Ibrahim Pasha prevents this escape and takes the kid from her. For a couple of years later, Rustem Pasha divorces Nigar Hatun to marry Mihrimah Sultan whom he loved all along. Nigar Hatun always keeps responsible Hurrem Sultan and Rustem Pasha for the killing of Ibrahim Pasha and her daughter's being taken away from her. In order to avenge, she starts to work in Rustem Pasha's palace. Her sole aim is to kill Hurrem and Rustem, but she also grows a big liking towards Rustem Pasha and Mihrimah Sultan's daughter Ayse Humasah Sultan. Ayse Humasah reminds Nigar so much of Esmanur. So she changes her plans to kill Rustem and Hurrem. She wants to escape with Ayse Humasah and start a new life, but Rustem Pasha, Malkocoglu Bali Bey and a couple of soldiers with them catch her nearside a cliff. First, she appears to threaten Rustem with jumping off the cliff with the baby. But she doesn't. She ultimately hands the baby to Rustem Pasha and throws herself off the cliff. While she is falling, she reminisces the words of Ibrahim Pasha's wanting to have a child with her.